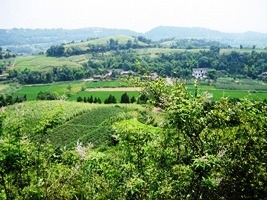 All is not loss: Plant Biodiversity in the Anthropocene

What are we humans doing to biodiversity in the Anthropocene? Causing Earth’s sixth mass extinction? (e.g. Barnosky et al. 2011 and others). How about something completely new to biodiversity on this planet? How about a massive globalization of species leading to the widespread emergence of novel ecosystems enriched with exotic and domesticated species (Hobbs et al. 2009).

That’s the main message of our study published today in PLoS One, where we present the first spatially explicit global assessment of plant biodiversity patterns created by humans (anthropogenic biodiversity; Ellis et al. 2012). We set out on this work more than 3 years ago with the goal of testing a key hypothesis in my first paper on anthromes (Ellis and Ramankutty 2008): that current global patterns of biodiversity are better explained by global patterns in human systems (populations, land use) than by the “natural” biophysical patterns of the Earth system (climate, geology).

What followed was a journey- starting from the naïve belief that global patterns of biodiversity, in terms of species richness (total number of species), would be well enough described at regional landscape scales (Noss 1990), at least for some taxa, to allow us to test the hypothesis once and for all. While native species richness data for vertebrates, especially birds and mammals (e.g. Grenyer et al. 2006, Schipper et al. 2008) are now fairly complete and available, to get a full accounting, we also needed data on exotic species and could find no appropriate data for these. Moreover, our most enthusiastic collaborator, Holger Kreft, suggested we focus on plants- much more abundant species than vertebrates (~300K vs. ~40K).

That was the end of innocence for us, but yielded the first conclusion of the work: we still know too little about the global patterns of plant biodiversity at regional landscape scales– both for natives and exotics- to assess current global patterns of plant biodiversity directly from measurements. So, we soldiered on and used models for native species richness (Kreft and Jetz 2007), native species losses caused by habitat loss (classic species-area relationships by biomes; Kier et al. 2005), exotic species invasions (Lonsdale 1999), crop species (Monfreda et al. 2008) and estimated ornamental species richness based on urban exotic data in the scientific literature. As with much scientific work, we never did test our hypothesis (the models we used wouldn’t allow this). But what we did find really surprised us. The big story of plant biodiversity in the Anthropocene is not about loss at all. Our model predictions indicate that human systems have caused a net increase in plant species richness across more than two thirds of the terrestrial biosphere, mostly by facilitating exotic species invasions. Moreover, exotic species increases tend to be associated with native losses and usually exceed them. Together these coupled processes of species gain and loss may be thought of as new global biotic process of anthropogenic ecological succession, leading to the widespread emergence of novel ecosystems. While conclusions from our model results can only be preliminary, they confirm and build upon the results of many prior studies (e.g. Vitousek et al. 1997, Sax and Gaines 2003, Stohlgren et al. 2008).

Some caveats are important. Species richness is a primitive measure of biodiversity- the relative abundance of species and their taxonomic diversity are critical in determining community structure and function (Isbell et al. 2011) . Plants are not like vertebrates, which, despite their mobility, seem far less capable of hanging on in the margins than most plants (expect the species that love us too much- like rats, cats and deer). Mass extinctions may still be coming in the long term, especially if our alteration of global climate continues to accelerate. Finally, it takes generational time to determine whether species are going extinct (Tilman et al. 1994). Plants are among the longest -lived organisms, and many tree species may already be living fossils- or emerging domesticates- if artificial propagation is required to avert extinctions. Nevertheless, the message is clear. While we are losing species from regional landscapes across the planet- causing very real and permanent extinctions, so far, the main anthropogenic global change in plant biodiversity is a profound and massive shift of biotic communities to novel forms never seen before on Earth, with natives relegated to a minor role alongside newly dominant exotics. Yet even in ancient agricultural villages and urban domestic gardens, the most densely populated and intensively-used anthromes, the majority of native plant species appear to be sustaining viable populations, though in the shadow of their more abundant exotic competitors – a pattern of change in plant species assemblages resembling those observed during prior mass extinctions in the fossil record (which are based solely on losses of Marine taxa; McElwain and Punyasena 2007). As a result, the term “extinct in the wild” may already be obsolete and “Homogocene” may be as good a name for our new geological epoch as Anthropocene (Rosenzweig 2001, Ellis 2011). Only about 100 of 300,000 plant species are known to be extinct (IUCN red list; though most extinctions are probably unknown). Moreover, it appears that novel ecosystems enriched in exotics tend to sustain rather than diminish ecosystem functioning (Mascaro et al. 2012)

Global stewardship of biodiversity will require fundamental advances in global scientific understanding of how native species can be conserved within the novel plant communities created and sustained by human systems across most of the terrestrial biosphere in the Anthropocene.

We challenge the biodiversity and global change communities to replace our model-based global assessment with global observations. We realize that this is no small task. To get there we will likely need to change the way we study global change and conserve biodiversity- to acquire biodiversity data across regional landscapes globally will likely require an unprecedented level of open-source scientific crowd-sourcing and conservation collaboration (Anstey 2012, Lin 2012). Yet the future of biodiversity on this planet will depend on it (Ellis 2011a)

And maybe then we will finally get to test our hypothesis!

Ellis E.C. 2011. Anthropogenic transformation of the terrestrial biosphere. Proceedings of the Royal Society A: Mathematical, Physical and Engineering Science, 369:1010-1035.

Ellis E. 2011a. The Planet of No Return: Human Resilience on an Artificial Earth. In: Love Your Monsters: Postenvironmentalism and the Anthropocene. (eds Shellenberger M, Nordhaus T), Breakthrough Institute.

Ellis E. C., Ramankutty N. 2008. Putting people in the map: anthropogenic biomes of the world. Frontiers in Ecology and the Environment, 6:439-447.

Rosenzweig M (2001) The four questions: what does the introduction of exotic species do to diversity? Evolutionary Ecology Research, 3:361-367.