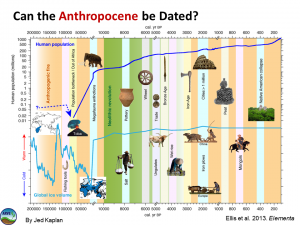 What Time is it? Early Anthropocene @theAGU & Straw Poll

It was a great week at the American Geophysical Union(AGU) Meeting in San Francisco, especially with the many sessions sponsored by IGBP – the international scientific program that brought you the Anthropocene– as part of its transition to Future Earth.

I gave a talk on the emergence of humans as a global force in the Earth System based on my recent centennial paper (Ellis 2015) in a session sponsored by the Global Land Project <link to session, abstracts>.

But the real highlight for me was the session I hosted together together with Kees Klein Goldewijk and Jack Williams: “Dating the Anthropocene: Early Land Use and Earth System Change, which was sponsored by IGBP and the Past Global Changes project (PAGES).

The session <details & abstracts here> led off with Mark Maslin, who gave a rousing recap of his major paper on the Anthropocene in Nature this year, arguing persuasively for an Anthropocene demarcated in 1610 by the “Orbis spike” (Lewis & Maslin 2015). Kees Klein Goldewijk provided updates on his early global land use reconstructions (HYDE going to 3.2 & 4.0). Mark Bush presented on the ecology of prehistoric Amazonia- with intensive land use along waterways but far lower levels elsewhere (Bush et al 2015). Feng He presented climate simulations backing up the claim that early land use changed climate millennia ago (He et al 2014). I presented Jed Kaplan’s latest work on early land use modeling and regional land change reconstructions.

All of this work will soon be advanced enormously by a major new collaborative international working group led by Kathleen Morrison, Land Use 6000 (LU6K), which aims to provide empirical global reconstructions of land use and land cover over the past 6000 years and earlier as part of the Land Cover 6000 project (LC6K) of PAGES.

The science on early human transformation of the Earth will only keep growing as it moves beyond its roots in Bill Ruddiman’s inspiring work (noted by almost every presenter), making me reminisce about first meeting Bill at AGU in 2008. An exciting example of what is yet to come is Kathleen Lyons’ exciting new work on anthropogenic biodiversity change more than 6000 years ago (Lyons et al 2015), which made an appearance in one of the talks.

But perhaps the most entertaining part of the session was our use of a cancelled presentation slot to conduct a straw poll of Anthropocene start times. With only 15 minutes available we kept it simple- no details, no frills, just a “beauty contest” of four start time proposals with each person in the room (n = 43) having one “Yes” vote, and one “No” vote.

Here is the tally for each proposal:

No big surprise that an Early Anthropocene was popular, given our session topic, but it was remarkable how controversial ALL the proposals are- very mixed results!

We therefore followed up with the question: Should the Anthropocene be formally recognized by the International Commission on Stratigraphy in 2016? (the current target date of the Anthropocene Working Group).

What do you think? Take the Straw Polls by clicking on the links, below: